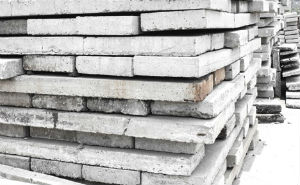 Let’s start with the standard concrete slab foundation, since this is the most commonly utilized foundation in modern home building. The term, “Concrete slab” does a pretty good job of explaining exactly what this foundation is. It’s nothing more than a slab formed by a block of concrete. Slabs are typically

Let’s start with the standard concrete slab foundation, since this is the most commonly utilized foundation in modern home building. The term, “Concrete slab” does a pretty good job of explaining exactly what this foundation is. It’s nothing more than a slab formed by a block of concrete. Slabs are typically anywhere from four to eight inches thick and are reinforced with steel rods and drainage pipes. Once the foundation’s prepared, the home is built directly on top of it.

If you’re building a home, a concrete slab makes sense because of its low cost. It’s the cheapest option available, and, comparatively speaking, it’s the quickest solution. The right crew can lay a concrete slab foundation in a short period of time, and the drying process doesn’t take much longer. Another benefit of a slab foundation is the fact that there’s no airspace in between the home and the foundation. As a result, there’s no room for mold or termite infestations.

However, slab foundations aren’t without fault. Homes built on slab foundations are susceptible to warming due to a lack of ventilation between the home and the slab. It’s also challenging to repair leaking and damaged lines that are embedded into the slab itself. Furthermore, the low-lying nature of slab foundations offers little in the way of protection against floodwater. 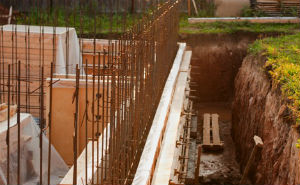 The biggest benefit of building or buying a home with a basement foundation is obviously the added square footage and space. It allows for extra living space or storage and can offer an excellent opportunity for future renovations. Basements also provide natural ventilation underneath he house, which can serve as an effective cooling mechanism during hot summer months.

While a basement comes with a number of advantages, you can expect to pay a hefty price for these features. A basement foundation is by far the costliest option and, ultimately, can lead to more maintenance issues if not properly cared for. Basements are notorious for having issues related to flooding, moisture, and mold. 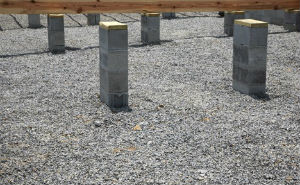 Another one of the more popular foundation types is the crawl space. As the name says, homes with crawl space foundations are built on small structures that, essentially, act as miniature basements. Crawl spaces are typically used when soil is tough to dig through. Generally speaking, a crawl space is no more than three or four feet high, and concrete pillars are placed around the perimeter to support the structure above.

A crawl space is arguably one of the most durable foundations in areas with a high groundwater level. The crawl space provides better protection against water and loose soil while simultaneously providing better airflow underneath the home during hot months. Crawlspaces can also be used for storing outdoor items.

The good ventilation that a crawl space provides during the summer months turns into a negative during cold months, making it slightly more difficult to heat the home. It’s also possible for stagnant water and moisture to become trapped in a crawl space and cause health issues. And, if a crawl space isn’t insulated and sealed, you may be asking for problems.

Advanced house framing, sometimes called optimum value engineering (OVE), refers to framing techniques designed to reduce the amount of lumber used and waste generated in the construction of a wood-framed house. These techniques boost energy efficiency by replacing lumber with insulation material while maintaining the structural integrity of the home. Advanced framing improves the whole-wall R-value by reducing thermal bridging (thermal flow that occurs when materials that are poor insulators displace insulation) through the framing and maximizing the insulated wall area.

When insulating your home, you can choose from many types of insulation. To choose the best type of insulation, you should first determine the following:

Some of the most common are:

When insulating your home, you can choose from many types of insulation. To choose the best type of insulation, you should first determine the following:

Some of the most common are:

Blanket insulation -- the most common and widely available type of insulation -- comes in the form of batts or rolls. It consists of flexible fibers, most commonly fiberglass. You also can find batts and rolls made from mineral (rock and slag) wool, plastic fibers, and natural fibers, such as cotton and sheep's wool. Learn more about these insulation materials.

Batts and rolls are available in widths suited to standard spacing of wall studs, attic trusses or rafters, and floor joists: 2 inch x 4 inch walls can hold R-13 or R-15 batts; 2 inch x 6 inch walls can use R-19 or R-21 products. Continuous rolls can be hand-cut and trimmed to fit. They are available with or without facings. Manufacturers often attach a facing (such as kraft paper, foil-kraft paper, or vinyl) to act as a vapor barrier and/or air barrier. Batts with a special flame-resistant facing are available in various widths for basement walls and other places where the insulation will be left exposed. A facing also helps facilitate fastening during installation.

The most common types of materials used for loose-fill insulation include cellulose, fiberglass, and mineral (rock or slag) wool. All of these materials are produced using recycled waste materials. Cellulose is primarily made from recycled newsprint. Most fiberglass products contain 40% to 60% recycled glass. Mineral wool is usually produced from 75% post-industrial recycled content.

Liquid foam insulation materials can be sprayed, foamed-in-place, injected, or poured. Foam-in-place insulation can be blown into walls, on attic surfaces, or under floors to insulate and reduce air leakage. Some installations can yield a higher R-value than traditional batt insulation for the same thickness, and can fill even the smallest cavities, creating an effective air barrier. You can use the small pressurized cans of foam-in-place insulation to reduce air leakage in holes and cracks, such as window and door frames, and electrical and plumbing penetrations.

There are two types of foam-in-place insulation: closed-cell and open-cell. Both are typically made with polyurethane. With closed-cell foam, the high-density cells are closed and filled with a gas that helps the foam expand to fill the spaces around it. Open-cell foam cells are not as dense and are filled with air, which gives the insulation a spongy texture.

The type of insulation you should choose depends on how you will use it and on your budget. While closed-cell foam has a greater R-value and provides stronger resistance against moisture and air leakage, the material is also much denser and is more expensive to install. Open-cell foam is lighter and less expensive but should not be used below ground level where it could absorb water.

There are many styles of floor joists to choose from. You have Engineered (I-Joists and Open Web) both have greater advantages over traditional Southern Yellow Pine floor joists.

TJI Engineered Joists - The can span further than traditional floor joists. TJI's are straighter, which gives you a better floor. There are pre-punched knock out

There are many styles of floor joists to choose from. You have Engineered (I-Joists and Open Web) both have greater advantages over traditional Southern Yellow Pine floor joists.

TJI Engineered Joists - The can span further than traditional floor joists. TJI's are straighter, which gives you a better floor. There are pre-punched knock out holes to run wires and plumbing lines through. There are limitations as to where you can drill holes and cut.

Open Web Floor Trusses - Spans can be much longer than TJI's. Open web designs can accommodate almost any kind of HVAC, Electrical and Plumbing configuration. Open Web Trusses can practically eliminate drop soffits, making the ceiling more appealing and more head room. This is a time and money saving characteristic.

As a Home Builder, Remodeler and Roofing Contractor, you are working with the Contractor from start to finish. We are not one of those builders who pull up to the project, look out the vehicle window and drive on. We are a hands on Contractor that is very involved in every project we do to make sure it is done properly.